A number of murals are located throughout Centralia depicting our rich heritage of industry, athleticism and serving and talented individuals.

This mural features 4 branches of the military at a medal award ceremony at an American Legion dinner. The coal train in the background and the wheat field is actually a mural within a mural on the rear of the meeting room. Centralia was founded in 1854 and brought into existence by the Illinois Central Railroad, the train symbolizes that history. The wheat fields recognize our proud farming heritage. 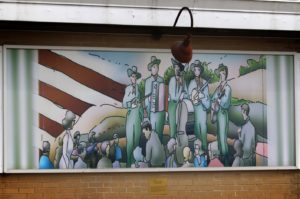 This mural depicts a frequent event at the American Legion in the 20’s and 30’s, the “Illinois Playboys” band from Wamac playing at a dance. The mural behind the band features amber waves of grain reflecting our rich farming heritage and the flag in the background carrying over from the center mural again symbolizes patriotism. 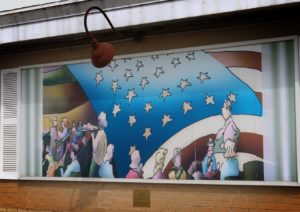 This mural represents a cross section of area residents at a chicken dinner at the American Legion. The chandelier is a wagon wheel, with the stars and stripes in the background symbolizing patriotism. 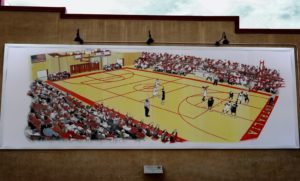 Home of the Centralia Orphans October 27th, 1936 – February 27, 2006
Trout Gym was named after Arthur L. Trout who continues to hold the state record of the most wins at one high school. From 1914-1950 Trout had recorded 809 team wins. The mural is an artist rendition of a photo taken of the last game played in Trout Gym on February 27, 2006. The photograph was taken by Centralia Morning Sentinel, Brian Hunt.

The nations winningest basketball team in the 20th century with 1890 wins! In 1937, the Centralia Basketball Cardinals were playing in the Pontiac Holiday Tournament when a Chicago sports writer noted that the team arrived in bedraggled warm-ups without buttons. The next day he wrote a story and said “Centralia looked like orphans but they could sure play basketball” coach Arthur L. Trout liked the saying and remembered the old movie “Orphans of the Storm” and he tagged the club “Orphans” and the name stuck. 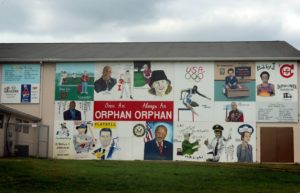 Dedicated on October 15th, 2016, The Mural Goal and Vision By Deborah Eubanks

Growing up in Centralia in the late 70’s many can probably remember the day high school students were allowed to paint Halloween motifs on the windows of the local business that line Broadway.

Those ‘good ol days’, became a topic of conversation with fellow classmates at a 2015, Centralia High School class reunion, which led to discussions about how many famous and successful individuals have graduated from CHS. It seemed obvious that a mural depicting some of our past “legacies,” would serve many positive purposes to benefiting the community.

The vision of the mural was that it would feature past CHS students that have gone on to pioneer successful lives. It would not be an exhaustive list of all the success stories graduating from CHS, but it would be as start. It would have to illustrate individuals from all backgrounds, with skills and intelligence across multiple disciplines and areas of interests. It would need to inspire and encourage children growing up in a smaller community to reach and exceed their dreams.

Exactly one year to this date (dedicated on October 15th, 2016) and hundreds of volunteer hours later, today, the mural compromises 15 successful CHS legacies spanning the arts, commercial business, math and science, music, politics and of course athletics. The goal of the artwork: To illustrate to youth that it doesn’t matter what their race, background, religion or socio-economic status is, that if they have the skill, intelligence, talent and drive, they can achieve their goals and aspire to greatness.

It was this mural team’s goal and vision to have successfully illustrated, through art, town pride but more importantly, to have extended an inspirational message to our youth for years to come. 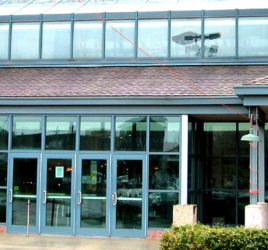